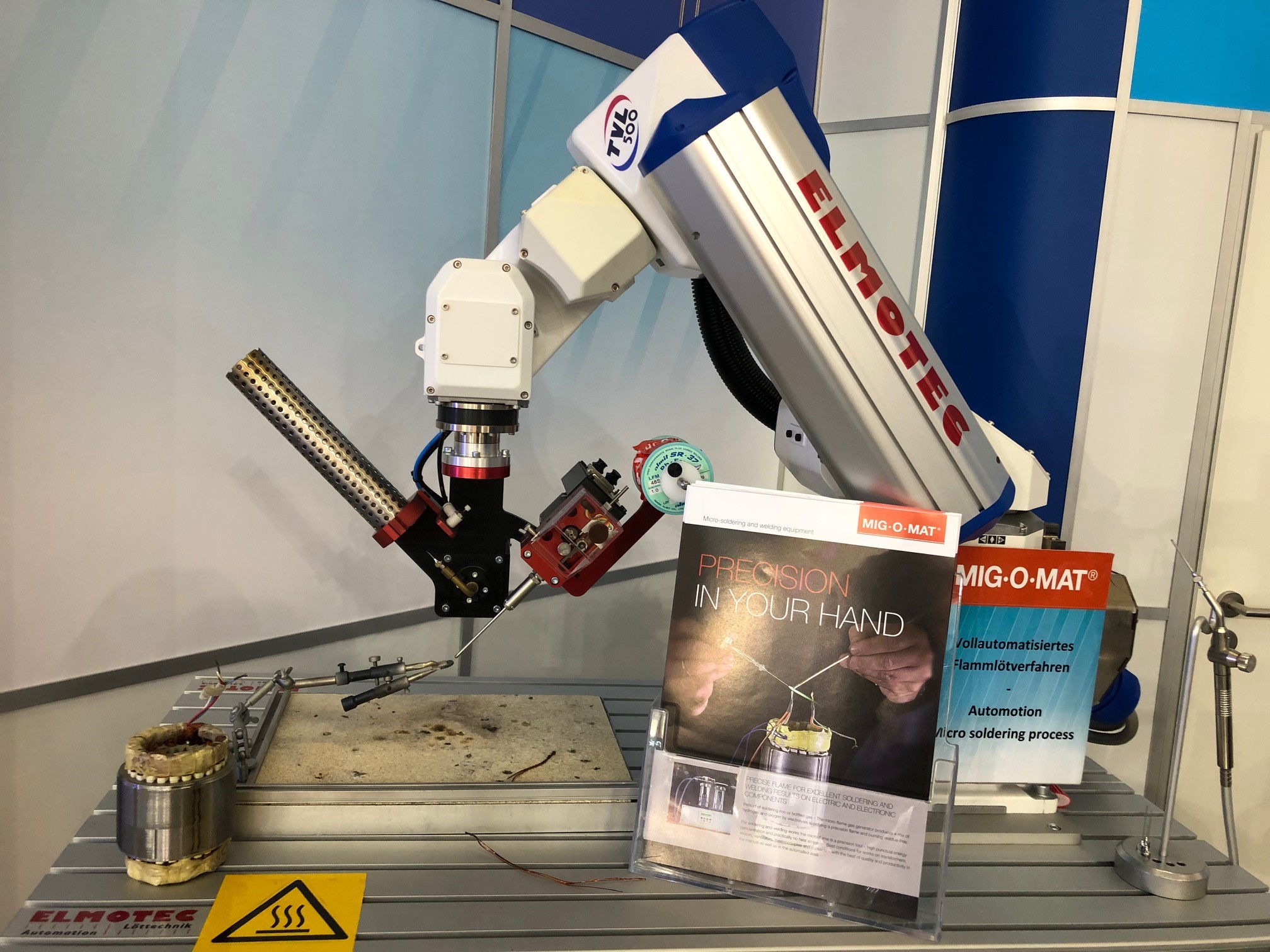 The earliest printed circuit boards, patented by Austrian inventor Paul Eisler in 1943, were assembled by hand. The tedious method involved manually cutting, trimming and soldering numerous wires. The process was slow and prone to error and unfortunately, it hasn’t evolved much since. Focusing on the manual side of processes, such as extra assembly, MIG-O-MAT approached industrial robot suppliers, Elmotec and TM Robotics to develop an automated soldering solution.

Since 1972, MIG-O-MAT has been developing welding technologies and corresponding appliances in the fields of plasma welding and microflame soldering. However, precision soldering applications have long been dependent on manual processes, making it virtually impossible to provide consistent quality.

Human error is always a risk with manual soldering. After all, human movement can never be entirely precise. As electronics components become smaller, the problem of inaccurate soldering is even more likely to occur.

MIG-O-MAT wanted to bolster its already established soldering technology, increasing accuracy and repeatability. To do this, the company began to investigate ways to remove 100 per cent of process fatigue by deploying automation. In other words, to remove humans from the equation.

Automating the process
Six-axis robots are an ideal option to automate repetitive tasks and as such, they have proliferated with the rise of mass production. Six-axis robots display high levels of positional repeatability; around 30-50µm. This repeatability has seen six-axis robots move from traditional manufacturing facilities into new applications, such as adaptive processes, accurate machining and in this case, soldering.

“Reducing process fatigue was a key priority when searching for a robot to integrate with our microflame soldering technology,” explained Burak Maltepe, sales engineer at MIG-O-MAT. “This came with two objectives: to increase the frequency and repeatability of precise micro-soldering applications without compromising the key positional accuracy of soldering, while also allowing end users to specify their own installation, allowing it to be suitable for numerous sectors.”

To achieve this, MIG-O-MAT approached Elmotec, the Swiss partner of TM Robotics, the EMEA, North and South American distributor of Toshiba Machine industrial robots. Elmotec specialises in solving application problems through the development and production of electric drives and controlled soldering equipment and machines.

TM Robotics and its network of global partners prides itself on its ability to recommend the right automation solution for unique applications, as opposed to selling an off-the-shelf machine. For this specific application, TM Robotics suggested the TVL500, a light-weight, compact vertically articulated six-axis robot.

Adjusting a six-axis robot to ensure high positional accuracy in precise soldering applications can be a significant operation. When integrating the robot with existing technology, there are a lot of considerations to be made in relation to positioning and reach.

The TVL series from Toshiba Machine resolves this issue. In fact, it was awarded the Nikkan Kogyo Shimbun Machine Design award for its ergonomic design. This includes the addition of four additional tool fixture tap holes, which are ideal for adding peripheral devices to the robot. Secondary tap holes on the base of the unit also allow the robot to be installed sideways. For MIG-O-MAT, this provides even more installation options for end users with tricky soldering requirements.

The TVL500 six-axis robot is the smallest of the two robots in the Toshiba Machine TVL range, offering a maximum reach of 602mm and a maximum payload of 3kg. With a standard cycle time of less than 0.4 seconds, this competitive automation is ideal for applications where high speeds and accuracy are necessary.

“Integrating the TVL500 improved the overall process time of a general soldering operation, but an unexpected advantage was the increased ease in which an operator can detect possible errors during soldering,” continued Maltepe. “With manual soldering, any errors that do occur are inconsistent and almost impossible to detect.  Using automated technology means errors — which have already been drastically reduced — can be identified easily. More importantly, end users can reprogram the robot to the correct adjustments and ensure the error does not occur again.”

The process of adapting the TVL500 for soldering was made easier because of TM Robotics’ experience in supplying robots for niche applications. As the official distributor for Shibaura, previously Toshiba, Machine outside of Japan, the company has several decades of experience supplying robots through its large distributor network, of which Elmotec is a Swiss distributor.

“At TM Robotics our entire philosophy is about making things straightforward and easy for our customers” said Nigel Smith, managing director of TM Robotics. “This philosophy stems through the ease of integrating our robots into production lines, to ensuring we have a trustworthy network of distributors who are able to fully understand their customer’s needs and provide the ideal solution.

Accuracy is important in all industries, but for the micro-precision soldering industry, maintaining absolute positional accuracy is key. As MIG-O-MAT discovered, automating precision tasks using a six-axis robot not only improves the accuracy substantially, but also the repeatability and throughput of the whole process.

More information on the range of six-axis robots can be found on the TM Robotics website. For further details or any specific questions on the technology, contact the experts at TM Robotics on 01707 290370 or sales@tmrobotics.co.uk.