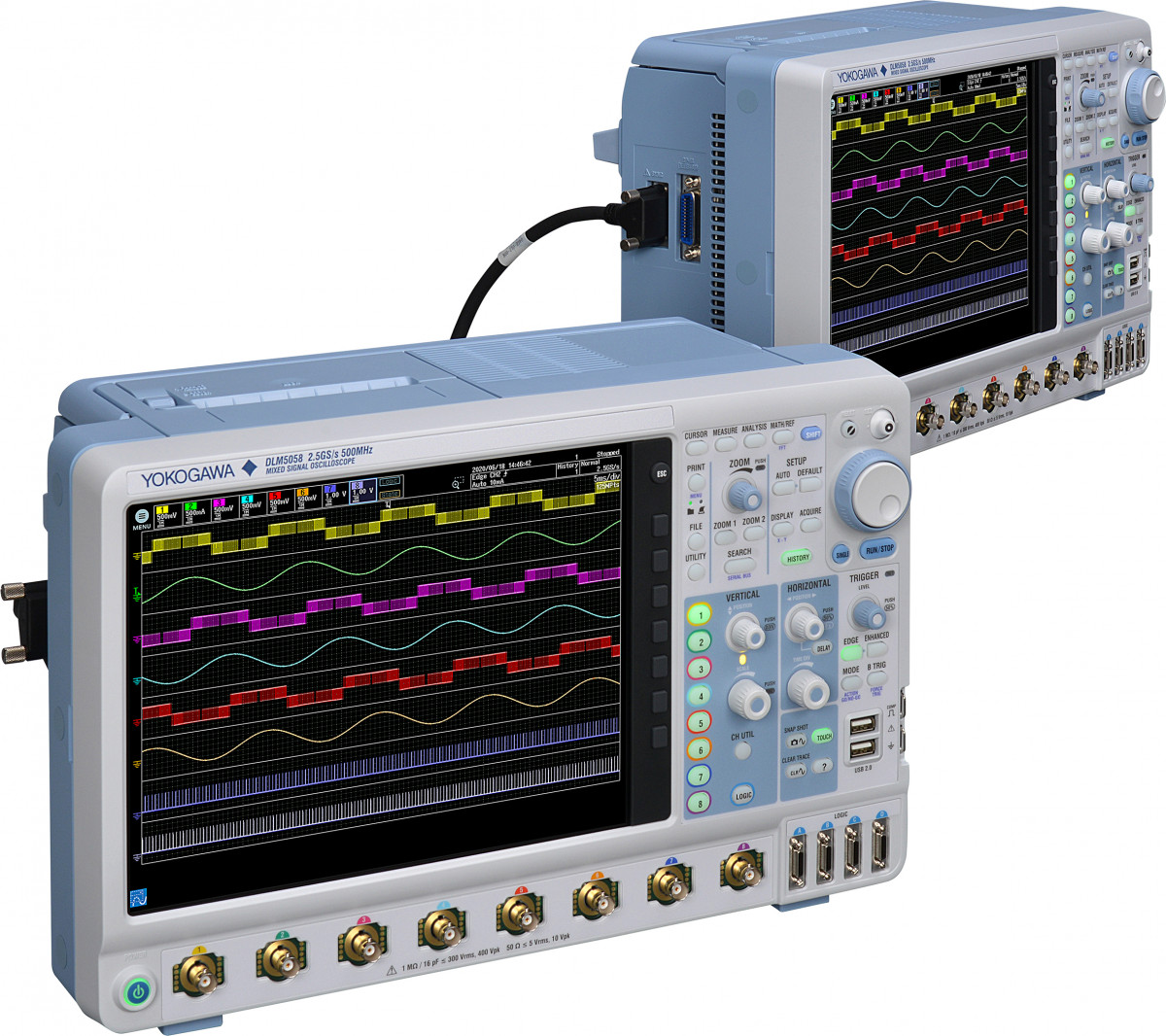 Yokogawa has launched the DLM5000, a new generation mixed signal oscilloscope with options for four or eight analog inputs.

The new oscilloscope is the successor to the previous 8-channel DLM4000 model. With redesigned hardware, the DLM5000 offers major improvements in both performance and operability, including a sampling rate double that of the DLM4000.

Designed to be supremely adaptable and flexible, the DLM5000 meets the exacting needs of companies in industries such as mechatronics, power electronics, automotive, aerospace, railway and consumer electronics.

The flexibility these users need is achieved with up to eight analog channels and 32 bits of logic, together with additional math channels, vehicle serial bus analysis, and numerous other analysis features.

A large number of channels are key to developing efficient and reliable high-performance electric motors. Based on modern inverters, successful development of these motors demands multi-channel, highspeed waveform measurement. These types of measurement often need more than four channels, which is why the DLM5000 offers eight true analog inputs, giving today’s engineers the tools they need for convenient and comprehensive measurement.

The DLM5000’s capabilities also make it ideal for the development of Electronic Control Units (ECU) for mechatronics systems. In this application, numerous I/O analog, digital, and serial-bus waveforms need to be measured. With the ability to monitor eight analog channels and up to 32-bits of logic input, 16 as standard plus 16 optional, while simultaneously performing protocol analysis such as UART, I2C, SPI, CAN, CAN FD, LIN, CXPI, SENT and FlexRay, the DLM5000 can speed up development when four channels are not enough.

Additionally, the new feature DLMsync, available soon, allows two DLM5000s to be linked and work together, extending measurements to gain even more information about the performance and behaviour of electronic systems.

With this feature, connecting two DLM5000s with a dedicated cable enables sampling clock and trigger synchronous measurement of up to 16 analog channels (8 + 8) plus 64 bit logic.

Alternatively, the eight channel and four channel models of the DLM5000 can be connected to give a configuration of  “8 + 4 = 12 channels”.

The DLM5000 can be used as an eight analog and 16 digital input mixed signal oscilloscope, with all channels able to be used simultaneously. With the /L32 option, up to 32 logic signals can be measured. Also included are a Bus/State display and an optional DA calculation function, useful for evaluating AD/DA converters.

Ease of use was another design objective for the DLM5000. It combines a large, highly responsive 12.1-inch touchscreen allowing easy monitoring of waveforms, not only when inputting eight channels, but also when the number of waveforms is increased by calculation or zooming. In addition to the touch screen, the DLM5000 also provides a traditional oscilloscope panel, allowing users to easily navigate through the unit’s wealth of analysis features.

Managing and accessing data is made easy through the DLM5000’s large memory, which can save up to 100,000 captured waveforms. With the History function, the user can display one or all of the captured waveforms on screen and perform cursor measurement, computation, and other operations on these displayed waveforms. The History function allows the analysis of rarely-occurring abnormal signals, even when an appropriate trigger condition is hard to find because its waveform shapes are not constant.

Terry Marrinan, VP Sales & Marketing Yokogawa Europe and South-East Asia, says: “With its eight analog channels and the ability to link up with other units, the DLM5000 sets a new standard in measurement flexibility. The large number of data points needed in the analysis of inverters, motors and mechatronic systems means that more channels are needed to capture that data. The Yokogawa DLM5000 meets the demands of today’s development engineers, giving them the features they need to analyse thousands of captured waveforms.”

Numerous methods can be used to search for waveforms meeting characteristics defined by the user, while users can also automatically play back, pause, fast forward, and rewind the waveform history record.

The DLM5000 offers dedicated serial analysis function options (/F01 to /F05) for embedded systems and in-vehicle bus signals, along with decode display analysis. The logic input can also be used for specific serial buses including I2C, SPI, UART and SENT. Complicated trigger and decode settings such as bit rate and threshold level are automatically detected.

Simultaneous analyses of four different buses can be carried out, with waveforms and analysis results from buses with different speeds being displayed using dual zoom windows.