Perhaps the most obvious environmental advantage of LED UV systems is their reduced energy consumption. Comparing a high intensity, broad spectrum UV spot curing lamp based on a mercury arc bulb with a comparable LED-based UV curing unit shows about a 80% reduction in power consumption when in use – 250 W against 55 W.

There are significant further savings with LED UV systems because they are used differently. Mercury arc lamps require warm up time before they are at optimal power, and cool down time before they can be re-ignited, and so users run them continuously during production hours – they can’t be turned on/off on demand. Frequent on/off cycles are also detrimental to bulb life. When the lamp is on, but not in use for curing, manufacturers use mechanical shutters to shield the light source; in consequence, energy is used when the lamp is not productive. LED UV lamps, on the other hand, have no warm up time and are instant on-off. The LEDs are switched on as and when required, and no shutters are needed. Power consumption of the unit when the powerful LEDs are switched off is about 2 W. 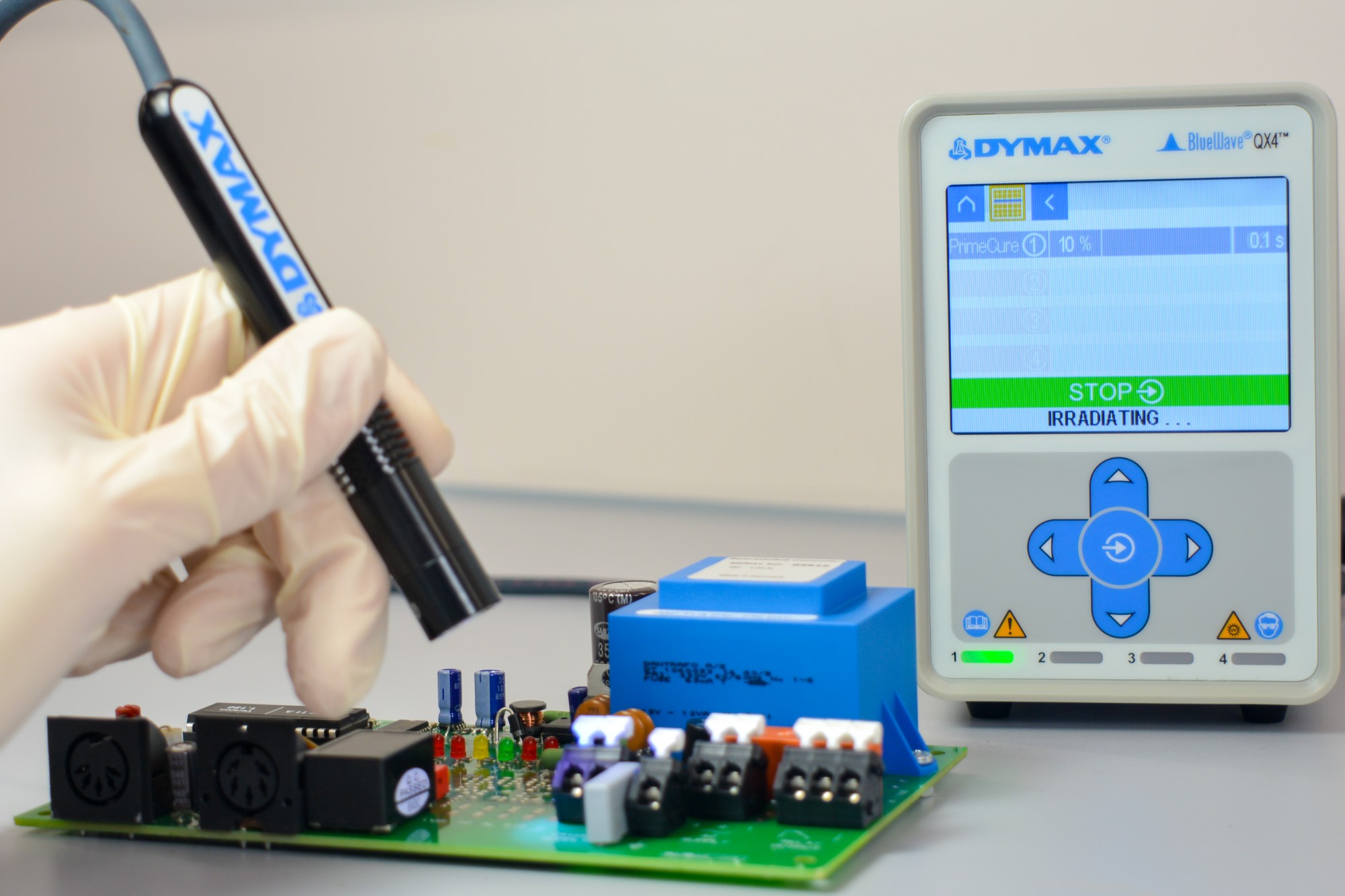 If we consider an eight hour shift, and high volume automated production where the LED-based UV lamp is on for half of the time, off for half the time, then the overall power savings is about 89%. For many UK manufacturers, a more likely scenario is that the UV LED lamp is only on for a maximum of 10% of the time, and then power savings is greater than 97%. With the average price cap unit rate as of October 1, 2022 of £0.52 per kWh, this represents an annual electricity saving of about £300 per lamp – more if you run multiple shifts. Remove the cost of spare bulbs and lost productivity from bulb changing and warm up time, and an LED UV system will result in large cost savings over time.

Moving away from mercury

LED UV systems, unlike traditional broad spectrum lamps, do not contain mercury. Mercury is one of the most hazardous environmental toxins and poses a danger to both the environment and human health and safety. There have been several moves to regulate the use of mercury – the Convention on mercury entered into force in 2017 and covers a ban on new mercury mines, the phase-out of existing ones, and the phase down and phase out of mercury use in a number of products and processes.

The Minamata Convention on Mercury is a global treaty to protect human health and the environment from the adverse effects of mercury. Further international legislation in 2020 banned the manufacture, import, and export of mercury, although there are some exemptions in place – for example, for lamps emitting mainly light in the ultraviolet spectrum, as long as they don’t exceed a certain mercury-content threshold. The exemptions will not be extended forever, and the health & safety and environmental arguments for getting rid of mercury when we can are beyond compelling. Increasingly, formulators are producing light curable materials which cure perfectly with the narrow spectrum output of a UV LED curing lamp, and whilst there are some applications which still demand the broad spectrum output for adequate cure, an LED UV process should always be the first considered.

Because mercury spectrum bulbs produce a small amount of short wave UV, which when combined with atmospheric oxygen can produce ozone, some large lamps have the potential to create an additional workplace hazard that manufacturers must address. Customers running powerful industrial lamps will typically require ozone extraction equipment to combat this, which can take up valuable facility space and be expensive to run. However, for smaller lamps, such as the systems we provide, this is typically not a consideration.

A typical broad spectrum lamp lasts 1,000-2,000 hours before the user will need to replace and dispose of the mercury-containing bulb, whereas LED curing units offer an expected useful life of 20,000 hours. In practical terms, LED units will last the lifetime of any production, and preclude regular bulb replacement, because they are only on for a fraction of production time. They have uniform frequency and intensity output over their lifetime, so the curing process has fewer variables ─ enabling more consistent cures, improving yield and reducing scrap. Both of these factors reduce the amount of cost and waste the process produces.

Another advantage of LED systems is that they operate at a lower temperature than mercury lamps, removing the installation and running costs for heat extraction (exhaust).

LED UV systems can reduce a business’s carbon footprint, while decreasing the need for disposal of mercury as hazardous waste. Even without considering the environmental advantages, the technical, process, and ROI benefits are often enough to encourage manufacturers to opt for an LED UV system. An experienced adhesives supplier can help you build a process where the lamp, dispensing equipment, and material are all optimised to work together.

Intertronics is committed to helping its customers move towards LED UV curing. For more information on LED UV curing systems, visit https://www.intertronics.co.uk/product-category/uv-equipment/uv-led-lamps/ or call 01785 225416 to speak to a specialist.