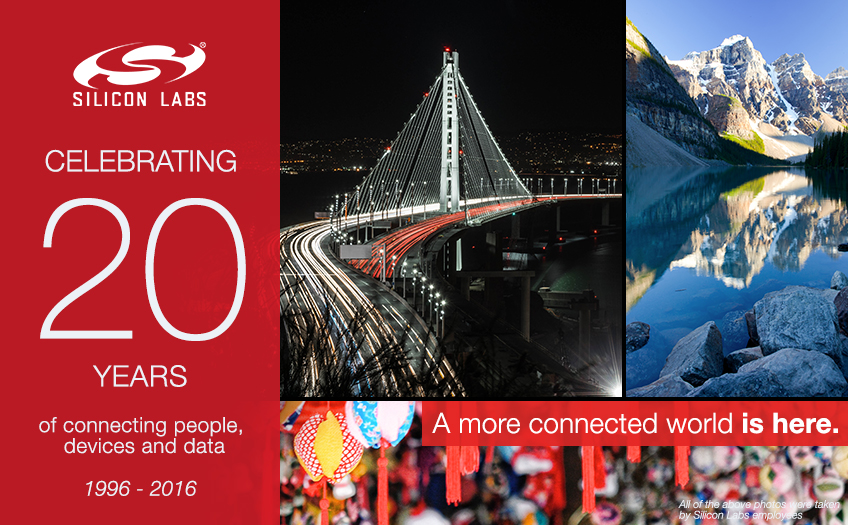 Silicon Labs (NASDAQ: SLAB), a leading provider of silicon, software and solutions for a smarter, more connected world, celebrates its 20th anniversary today. Over the last two decades, the company has evolved from a semiconductor start-up committed to helping developers reduce the cost, size and complexity of their system designs into a global leader in energy-friendly connectivity solutions for the Internet of Things (IoT). Silicon Labs has shipped more than 7 billion devices to date, holds more than 1,500 patents and employs 1,200 people around the globe. .

When considering whether to strike out and create their own company, Silicon Labs’ founders Nav Sooch, Dave Welland and Jeff Scott turned to a simple coin toss to help them decide. The coin came up heads, and the company was incorporated in 1996. The team’s first two integrated circuit (IC) designs included a global analog modem for personal computers and the world’s first CMOS-based RF synthesizer for mobile phones. On the strength of these two IC products, Austin Ventures funded the company with a $5 million first round in March 1997. Silicon Labs became profitable within two years and went public in 2000 with a successful initial public offering (IPO) that raised nearly $100 million.

“What united everyone at Silicon Labs in the beginning was a desire to enjoy our work and collaborate with really smart people,” said Nav Sooch, co-founder and chairman of Silicon Labs’ board of directors. “We knew that much of our success in the early days would depend not only on the projects we created but how well we worked together in cohesive, high-performing teams. The kind of atmosphere we enjoyed then, and what is thriving within the company now, is built on the values we outlined at the start – hiring the best talent, pursuing excellence, creating a healthy work environment, sharing our success with employees and giving back to local communities while achieving profitability year after year.”

The Next 20 Years and Beyond

Over the past 20 years, Silicon Labs has posted a solid history of product innovation, driven by the high caliber of engineering talent underpinning the company’s success in diverse markets, from broadcast audio and video to telecommunications, industrial automation and now the IoT. Silicon Labs’ expertise in mixed-signal design and RF technology has propelled the company to the forefront of the IoT market, which includes smart metering, home automation, wearables and industrial IoT– virtually any application requiring connectivity. The company’s strengths in integration, scalable platforms, wireless software and development tools will continue to fuel new innovations and deliver breakthrough solutions for the coming decades.

“Silicon Labs has a long history of leveraging mixed-signal and RF design expertise to deliver highly integrated solutions,” said Tyson Tuttle, CEO of Silicon Labs. “From advanced timing solutions, radio and TV tuners, digital isolators, microcontrollers and wireless SoCs for the IoT, we have consistently demonstrated the ability to drive innovation and achieve market leadership. Our vision is to connect people, devices and data across a wide range of markets and applications. We are beginning a new chapter in the creation of a more connected world, where the intersection of cloud computing and the proliferation of connected devices will transform our lives and economy in dramatic ways, and Silicon Labs is at the heart of it.”