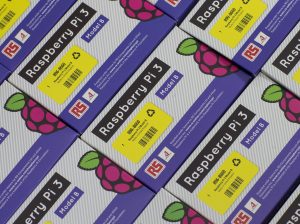 RS Components (RS), the trading brand of Electrocomponents plc (LSE:ECM), the global distributor for engineers, today announced in conjunction with the Raspberry Pi Foundation that the cumulative sales total for Raspberry Pi products has now reached 10 million units, further cementing its position as the best-selling British computer ever. To celebrate this significant milestone, the Raspberry Pi Foundation is holding a special event at the House of Commons, hosted by Matt Hancock MP, Minister of State for Digital and Culture.

RS has played an important role – from the very beginning in February 2012 – in enabling the Raspberry Pi to reach this impressive sales landmark. In addition to being an authorised distributor, RS is one of the official manufacturers of the Raspberry Pi and, during peak production, produces just short of 1400 boards per hour with manufacturing partner Sony at their factory in the UK.

Attending the event in London today, Lindsley Ruth, Group Chief Executive at Electrocomponents, commented: “We are privileged to be a part of the phenomenal achievement that is Raspberry Pi. It has been a huge hit in many industrial applications as well as in the education sector. RS is a key link in the supply chain of this remarkable success story of 10 million boards sold, this is a very proud moment for all of us.”

Targeting use in industry, in homes and in schools and colleges worldwide, the Raspberry Pi Foundation has introduced a number of new and increasingly powerful models since the board’s launch more than four years ago, all available from RS across EMEA and Asia Pacific, and from Allied Electronics in North America. The latest model is the Raspberry Pi 3 Model B, which was launched in February of this year. This board has significantly upgraded processing capabilities to deliver 50% more performance than Raspberry Pi 2 and approximately ten times more than the original Raspberry Pi, allowing it to run even higher-end applications, as well as offering integrated Bluetooth and wireless LAN connectivity as standard for Internet of Things (IoT) development projects.

For more information, please visit the website at www.rs-online.com.