The indices from the August 2022 and Q3 2022 Electronic Component Sales Trend Surveys (ECST) reveal expectations that go from bad to worse as the industry moves through the 2nd half of 2022. The overall index average slumped from 94.7 in July to 86.0 in August. The one relatively bright spot is the expected stabilization of market sentiment in September as the outlook calls for a level of 88.4. Measurements below the benchmark level of 100 indicate negative sales growth. Expectations for the Semiconductor market split significantly from the other markets. The index for Semiconductors remained stable between July and August and shows a surprising jump to 100 for the September outlook. Passives show the weakest results as the index comes in below 78 for August. Expectations for Passives and Electro- Mechanical components in September are roughly equal above 82. The overall index measurement for August was significantly lower than expectations reported in the July report as it came in more than 10 index points lower. The End Market index is slightly lower than the product index in August but than falls 13 points lower than the product index for the September outlook. These results come in at the lowest level since the COVID pandemic collapse over two years ago.

Unfortunately, the picture from the quarterly perspective is even more bleak. The overall share of those expecting market growth collapsed from 50% in Q2 2022 to 33% in Q3 followed by average expectations of growth reported by only 24% of participants. On the other side, the percentage expecting a declining market worsens from 32% in Q3 to 37% in Q4. Each of the three product segments show different quarterly trends. Again, Semiconductors are show the most hope as there is a gravitation to expectations for flat growth. The share expecting growth in Semiconductors falls by 15% from Q3 to Q4. However, the share seeing flat growth grows from 23% in Q3 to 42% in Q4. On the opposite side of the spectrum, Passives register only 28% expecting growth in Q3 and falls to only 15% in Q4. Meanwhile, expectations for a decline in the market increase from 29% to 41% between Q3 and Q4.

As noted previously, the economic environment appears to be the main contributor to the declining prospects for electronic component sales. The normal cyclical behavior of the markets does come into play, but the downward side of the cycle has been reinforced strongly by the economy. If the typical pattern of the electronic component cycle prevails, it would be expected that the second half of 2022 will mark the beginning of an extended period of weak sales. 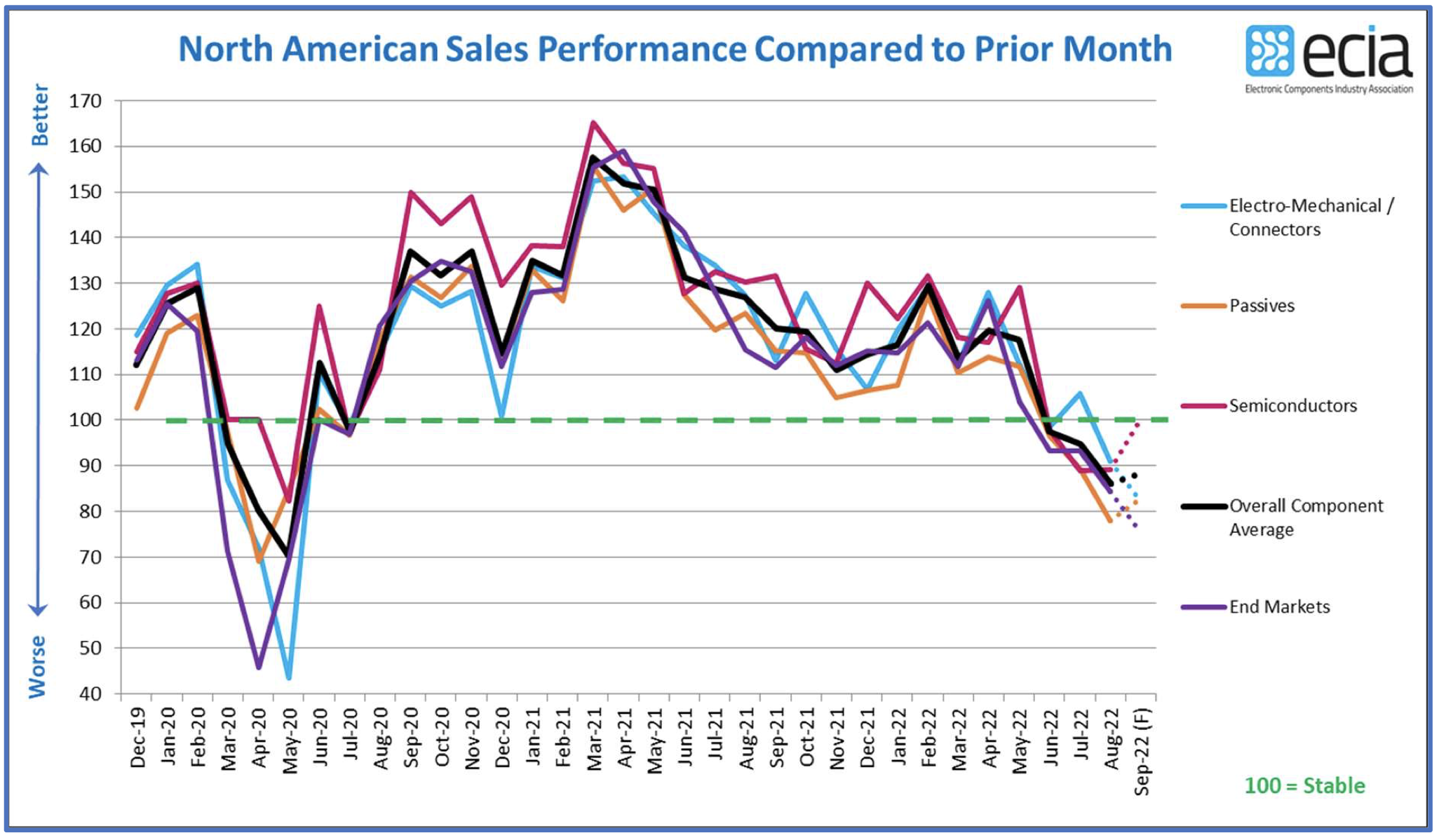 Every market segment, except for Military/Aerospace, is in solidly negative growth territory in both the August and Q3 ECST reports. Even Industrial Electronics fell below the threshold of 100 as it moved sharply downward from 109 to 90 between July and August. Mobile phones continue to show the weakest results in sales growth sentiment followed by Computer and Consumer Electronics. Automotive and Medical Electronics represent the next best market segments after Military/Aerospace. However, their index results come in only between 90 and 95. The expectations for all market segments, except as noted above, are for increasingly weak sales from August through the end of 2022. 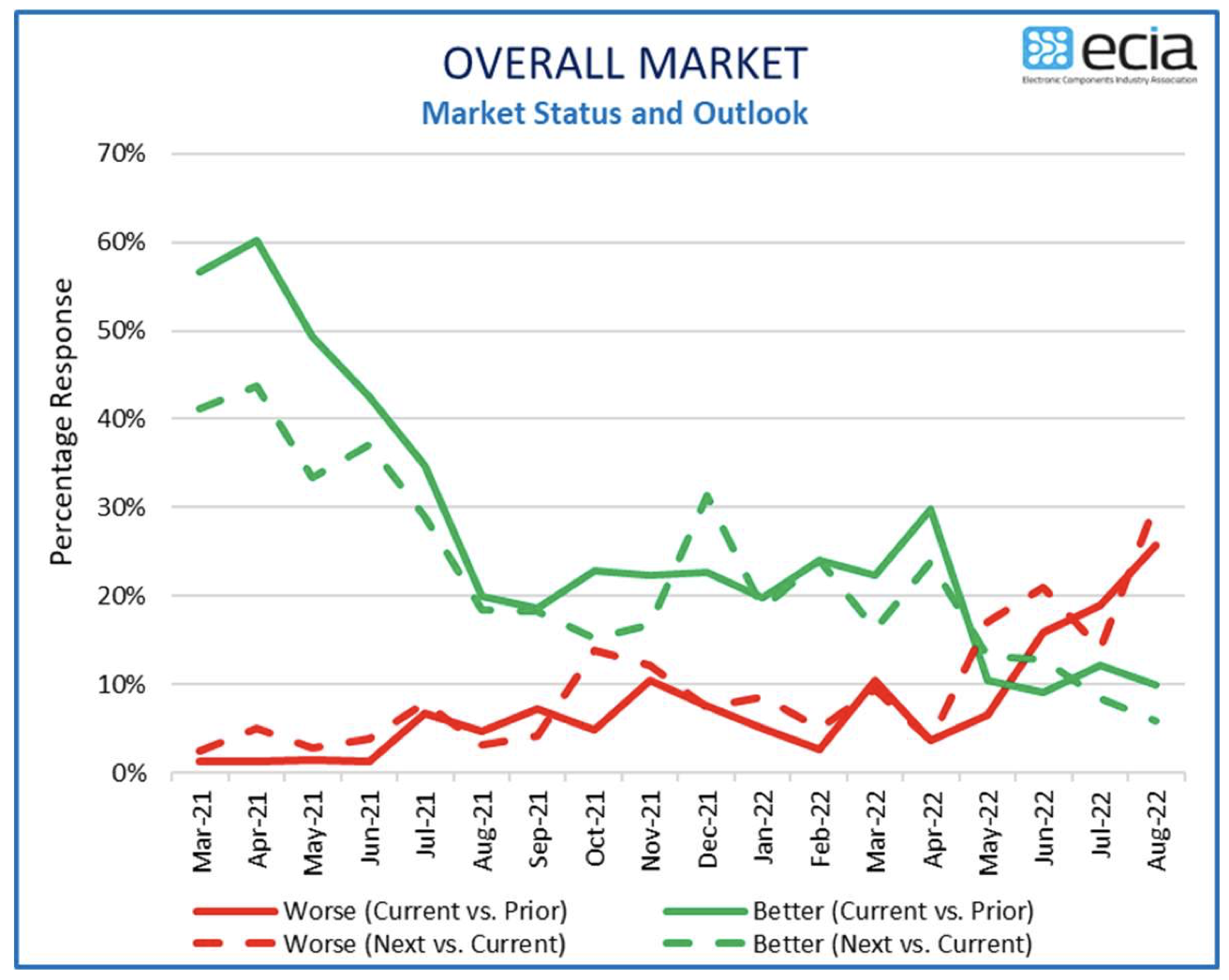 The combination of improved supply chain conditions and weak trending sales continues to benefit the lead time picture significantly. The percentage of survey participants seeing declining lead times in the Passive and Electro-Mechanical segments showed accelerated improvement in August. Those seeing declining lead times for Electro-Mechanical components moved from 15% to 23% between July and August. At the same time, those seeing increased lead times dropped from 23% to 12%. Passives followed the same trend with expectations for declining lead times moving from 25% to 30% between July and August. Semiconductor lead time expectations moved in the opposite direction as those expecting increases jumped while those seeing declines fell. Still, the overall lead time picture is the one encouraging area in the most recent measurements. 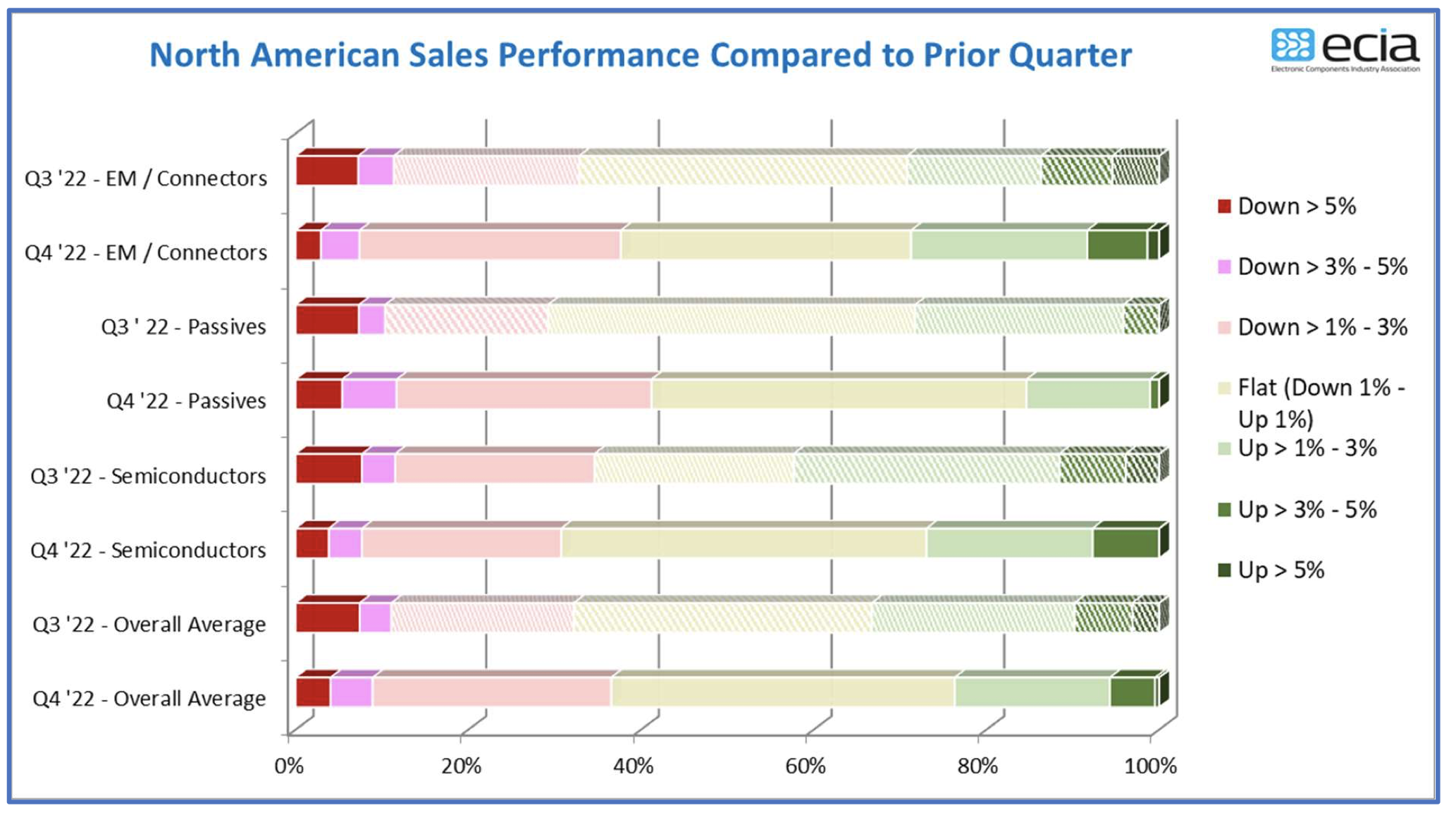 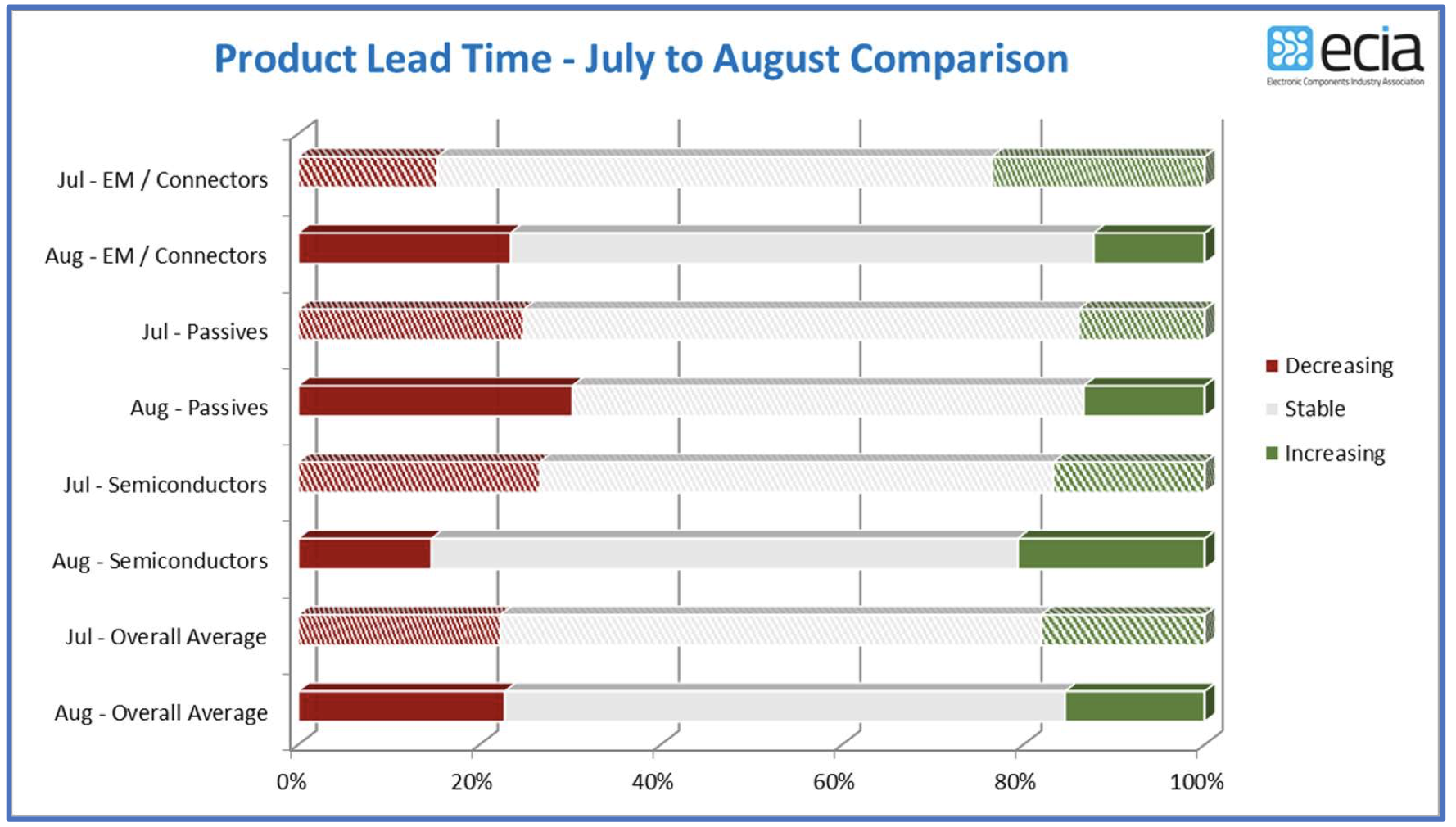 The ECST survey provides highly valuable and detailed visibility on industry expectations in the near- term through the monthly and quarterly surveys. This “immediate” perspective is helpful to participants up and down the electronics components supply chain. In the long-term, ECIA shares in the optimism for the future as the continued introduction and market adoption of exciting innovative technologies should motivate both corporate and consumer demand for next-generation products over a growth cycle that still appears to have legs to go an extended distance.

The complete ECIA Electronic Component Sales Trends (ECST) Report is delivered to all ECIA members as well as others who participate in the survey. All participants in the electronics component supply chain are invited and encouraged to participate in the report so they can see the highly valuable insights provided by the ECST report. The return on a small investment of time is enormous!