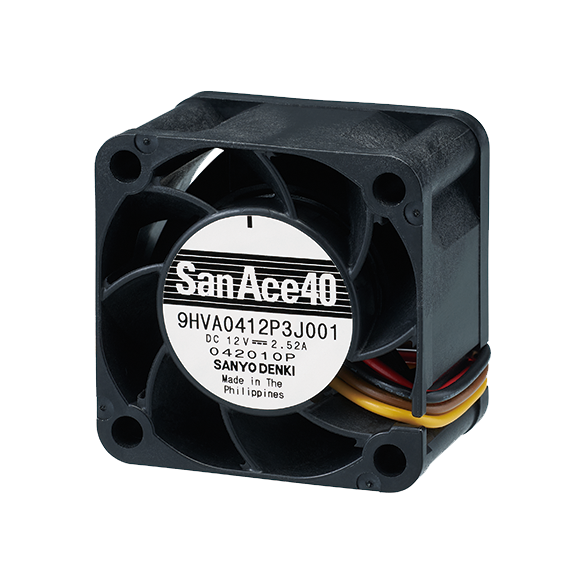 Developed by cooling specialist Sanyo Denki the new San Ace 40 12VDC axial fan delivers an airflow rate of up to 37.1 cubic feet per minute (CFM) and a static pressure of 2.300 Pa and easily outperforms the counter-rotating fans designers usually choose to cool modern 1U rack applications.

According to Robert Davies, Marketing Manager with Sanyo Denki’s UK representative EAO Ltd, the new San Ace 40 axial fan is built with a newly developed impeller and frame construction that delivers higher static pressure, together with proprietary motor, magnet and circuitry innovations that need much less power to operate: “Space inside a 1U rack is becoming increasingly tight at engineers try to squeeze more equipment into the same space,” Davies said. “This results in a high-pressure, high- impedance system that needs a lot of cooling airflow”. The usual cooling approach for 1U rack applications is a counter-rotating fan, but these units are space hungry and can be noisy: “The new San Ace 40 axial fan is half the volume of a counter-rotating alternative, saving 28mm of depth”, continued Davies. “Further, with this fan designers only need to accommodate half the number of fan connectors and half the number of speed sensor inputs”.

The new 9HVA0412P3J001 axial fan is part of Sanyo Denki’s extensive range of San Ace brand centrifugal, counter-rotating and axial fans, all supplied and supported in the UK by EAO Ltd. Sanyo Denki products can also be sourced on-line from Farnell and RS.