At the end of each year the Electronic Components Supply Network (ecsn) canvases its manufacturer authorised distributor (afdec) members’ opinions for the year in prospect and uses the data to compile the association’s annual Forecast. According to chairman Adam Fletcher, the Forecast issued by the association in December 2022 encompasses the whole of 2023 but given the current market conditions and geopolitical situation a revision may be needed in the second half of the year: “The strong growth that global electronic components markets saw throughout 2022 exceeded the Forecast ecsn issued at the end of last year, said Fletcher. “Our members predicted strong Billings growth in 2022 in the range 8%-to-12% but we now believe that the outcome is likely to be 18% growth, driven primarily by customers’ concerns about components availability. The geopolitical tensions resulting from the Russian invasion of Ukraine, additional sanctions imposed as a result of the ongoing US / China trade war, and ongoing international and domestic logistics delays have encouraged customers to maintain their increased in-house inventory and order backlogs”. 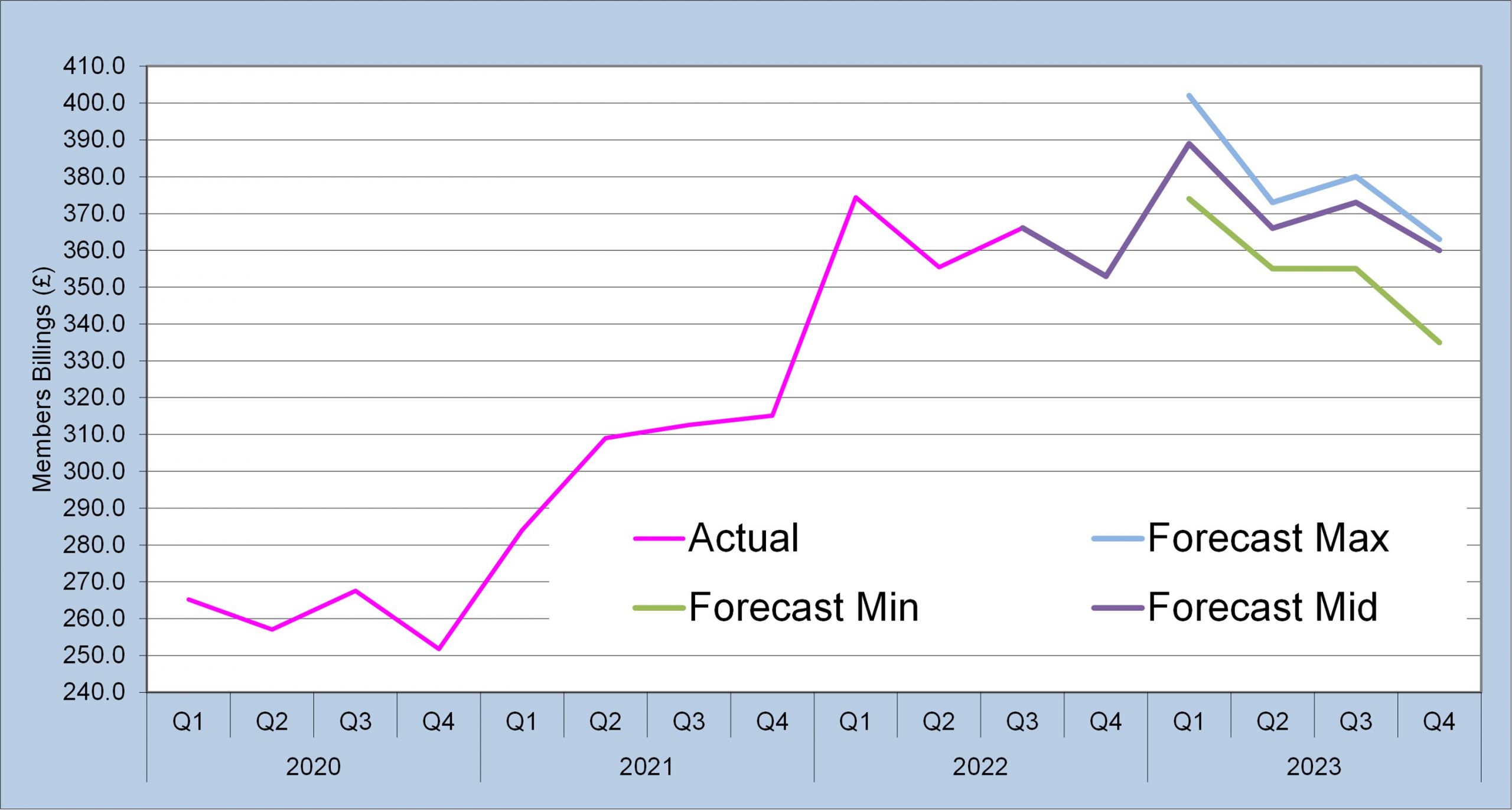 With all geographic regions of the global economy simultaneously emerging from COVID-19 lockdowns demand outstripped the ability of component manufacturers to supply in 2021 driving a steep change in average lead-times that jumped to over 26 weeks plus. Strong demand continued throughout 2022, but supply remained problematic exacerbated by continuing extended lead-times, particularly for Semiconductor and Passive components with ongoing disruption to long-medium-and local-distance logistics, product shortages, price increases, delivery de-commits, logistics delays etc.

Despite the very good outcome for the UK / Ireland electronic components markets reported by ecsn members the performance of semiconductor manufacturers around the world has at times been imperfect. Much of this failure is due to manufacturers having little or no control of the activities of their multiple sub-distributors EMS and OEM customers in Asia, particularly in China, where they have little visibility and control and product appears to simply ‘disappear’ into a black hole. As a result, customers in Europe and the USA have increasingly turned to Grey Market Brokers who have been able to source semiconductors from Asia in large volumes to satisfy customer demand, albeit at highly inflated prices. ecsn  members believe that semiconductor manufacturers must increase their capability to manage their global inventory, particularly in Asia. They must be able to exercise effective control over when, where and to whom their product is shipped, re-directing it as necessary to serve real customer demand and not the “phantom” demand created by organisations seeking to exploit failures in the market.

The Forecast released today by ecsn’s Leadership Group and presented by ecsn Market Analyst, Aubrey Dunford predicts that the UK & Ireland electronic components market will continue its modest growth in the first half of 2023, returning ‘Billings’ (Sales Revenues) growth of between 0%-to-6.3%, with a mid-point growth of around 3.5%. In the second half the association predicts that ‘Billings’ will slow modestly in the range (4%)-to-3% to give an outcome for the full year in the range (2%)-to-4.9% and showing a mid-point of 2.8% growth over the previous year. Dunford confirmed that the market conditions in 2019, 2020  2021 and 2022 had been far from normal due to the COVID-19 global pandemic but that some “normality” can be expected to return to the market in 2023: “The problem however is trying to determine what the “new normal” is in a global economy still recovering from the after shocks of a global pandemic such as double digit inflation, a huge increase in energy costs, and a cost of borrowing money that has returned to pre-Bank Crisis levels, whilst at the same time dealing with a war in Europe,” said Dunford. “The Distributor Total Available Market (TAM) will have grown in 2022 by about 18%, higher than we expected when we produced our forecast in December 2021. That said, product shortages, extended lead-times, exchange rate fluctuation, rising raw material costs and labour rates, have led to price rises higher than our members anticipated. Global demand has remained higher than we forecast and is still strong despite the slowdown in China as the handset and PC market cools”. 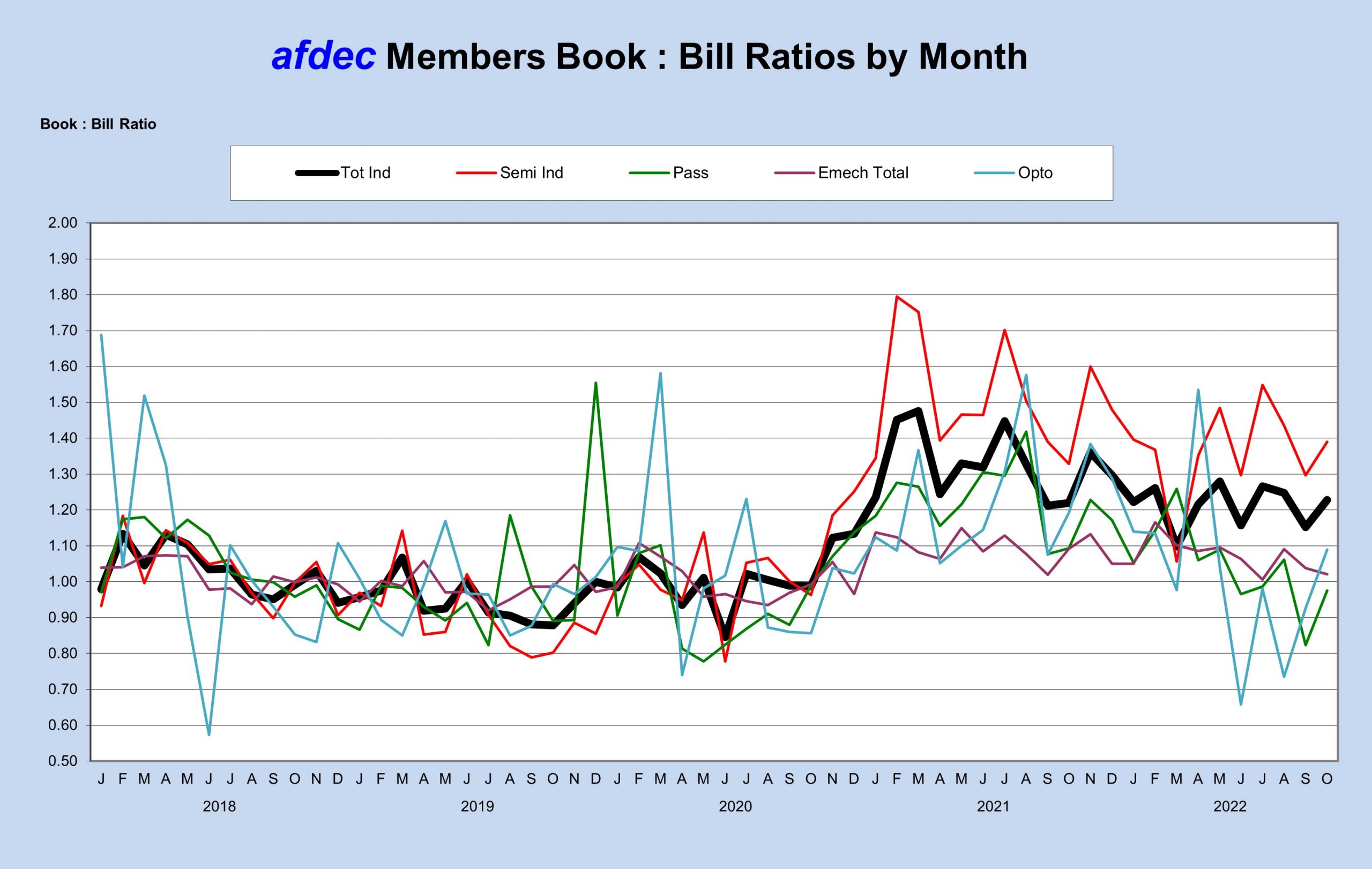 From the start of 2021 ecsn members saw ‘book-to-bill’ ratios rise to levels rarely, if ever seen in the electronic components supply network. Unprecedented ‘Bookings’ were driven not only by the extending lead-times but also by price increases: “The high ‘book-to-bill’ ratios carried on throughout the first half of 2022,” continued Dunford. “From the middle of the year the ratios for Passives and Electro-Mechanical products started to decline and headed towards unity in the summer months. Semiconductors, however, have continued to see a high B2B ratio throughout the third quarter. Our members are therefore confident that we will continue to see growth in the market for at least the first half of 2023. Looking further into the second half of the year is more difficult, however. Many uncertainties remain, especially in the light of predicted recession in the global economy, so we are forecasting for growth to slow at the end of the year”. Although the major industry analysts are forecasting that in electronic components markets and especially semiconductors, growth will decline and become negative in the global market in 2023, Dunford sees that decline being limited to the huge consumer electronics applications:  “In the UK, and indeed in most of Europe the component market is driven primarily by the automotive, industrial and professional application areas. We expect projects, such as the roll out of 5G and faster data communications that are by nature longer term will remain strong, although there may be a slowing down in investment. Also, demand from the Military and Aerospace sector will for more obvious reasons, remain strong”.

Customer order backlog levels reported by ecsn’s manufacturer authorised distributor members reached unprecedented heights in 2022, a trend that looks likely to slowly reverse in 2023 due to improving customer confidence and declining components manufacturer lead-times. In collaboration with their supply network partners the association is advising customers to gently “roll back the throttle” as their confidence increases in the supply of components and an uptick in their customers new orders: “Rapid changes by customers expose their organisation and their supply network to increased risk”, Fletcher said. He believes that change will happen as manufacturer lead-times inevitably decline but his members’ opinions about when this will happen and by how much, vary: “The consensus opinion held by ecsn members is that by mid-2023 lead-times will be stabilised at around an average of 12-to-16 weeks for most semiconductor and passive components, with interconnect and e-Mech components remaining in the 8-to-10 week lead-time. There will remain some ‘outliers’ on much longer lead-times across all components categories”. Fletcher remains concerned about availability: “I suspect that all electronic components will remain on lead-times in the 6-to-16 week timescale for at least the next few years, so we are not going to see a return to virtually zero lead-times that characterised the first two decades of this century”.

Up and To the Right…

The trajectory for the electronic components markets continues to be up and to the right. Despite the ‘difficult’ market conditions in 2022, which Fletcher believes will continue throughout 2023, he remains confident that even stronger underlying growth will return to global electronic components markets because there are so many competing applications driving it: “The roll-out of 5G handsets and infrastructure, cloud computing / high performance computing and automotive are the likely main ‘push’ applications. I expect industrial automation, medical aviation and military will run these sectors a close second in 2023”.

The electronic components supply network fortunately still operates as a “people to people business” where great relationships, effective communication and collaboration, along with a large dose of good humour rank high amongst the key elements for success, but a great many geopolitical and economic uncertainties remain that could impact the market. ecsn members remain very positive about their organisations’ and their customers’ prospects into 2023 and the association will continue to provide timely guidance and updates to the market on its members outlook as appropriate: “To help mitigate the supply and demand imbalances in the market all organisations are encouraged to play their part in their industry’s continuing success by participating and contributing to the collaboration process up and down their supply network” Fletcher concluded, “These initiatives really cost organisations very little but the improvements they can make to competitive advantage are immense and will benefit everyone as we move into 2023 and beyond”. 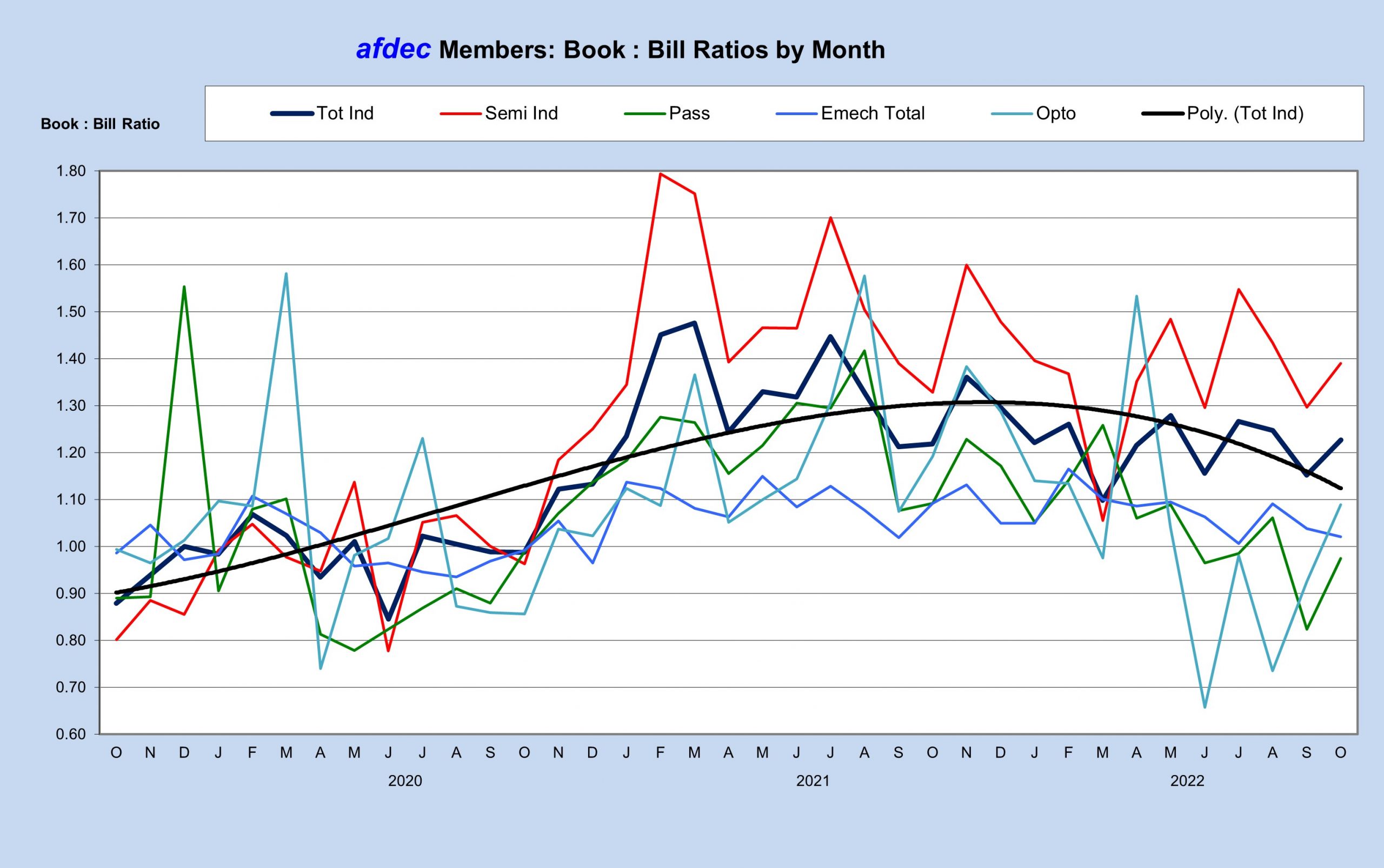