At the end of each year the Electronic Components Supply Network (ecsn) provides a provisional twelve month Forecast for the year in prospect. The forecast issued by the association in December 2019 reflected the ‘reasonable’ confidence expressed by ecsn members for the first half of the year but the association chose to limit its predictions for the second half of the year to ‘best guidance’, due to the lack of customer visibility in the electronic components market coupled with ongoing geo-political uncertainties. The association is now able to firm up this ‘best guidance’ and has today confirmed its forecast to the end of the year, together with the provisional release of the results for H1 2020.

According to ecsn chairman Adam Fletcher, the outcome for the UK electronic components market in the first half of 2020 revealed a decline of (10%) when compared to the same period last year. The association’s forecast for the second half of the year suggests that the market decline will slow and reveal a 2H’20 decline in the range (9%)-to-(3%), with a mid-point decline of (6%). The mid-year forecast released today by ecsn predicts that the UK & Ireland electronic components market will conclude 2020 showing a full year decline in the range (10%)-to-(6%), with a mid-point of (8%) decline on the previous year.

“The sharp decline in growth in 2020 is primarily the result of a global economic slowdown caused by the COVID-19 pandemic, which was not a forecastable event in 2019”, said Aubrey Dunford, ecsn Market Analyst. “However, the ongoing trade war between China and the US had already reduced demand in Q4’19 and enabled customers to de-stock based on increased availability due to tumbling component lead-times and because of their weakening customer order book”. The ‘Book to Bill’ ratio which was positive in Q1’20 but declined slightly in Q2’20 but the polynomial trend suggests that the B2B ratio is likely to remain positive into the 2H’20: “Customers who had been destocking in Q4’19 increased their in-house inventory and order cover in Q1’20 as manufacturer lead-times for components started to increase and with it, the potential risk of product shortages due to the population lock-down and China’s closure of much of its manufacturing industry” Dunford continued. “Fortunately, the supply situation has eased considerably in Q2 ’20, partly aided by lower global demand for electronic components”.

ecsn’s afdec members’ visibility in the electronic components market remains very limited due to the almost total absence of clear guidance from their customers, and there is understandably a wide and diverse range of opinions on the likely outcome for 2020: ”It’s always our aim to provide the electronic components markets, our members’ customers and investors with a balanced and evidence-based forecast and our forecast for the second half of the year reflects careful analysis of our members’ statistical data, reports from industry analysts and empirical data from a wide range of sources”, said Adam Fletcher. “Looking further ahead we believe that 2021 is likely to be a year of low growth and modest recovery for the UK and Ireland electronic components markets. Stronger real growth will probably not return until 2022, however the range of member and industry analyst opinions about when and what the rate of the growth will be remains very diverse”.

That said, Fletcher remains confident that the trajectory for the electronic components markets in the mid-term is up and to the right: “If we assume that the final outcome for 2020 is a sales revenue decline of (9%) when compared to the previous year, then the performance of the UK electronic components market and the wider electronic industry will have been fairly remarkable given the dreadful economic environment in which we are all currently operating”.  He remains confident that stronger underlying growth will return although the odd ‘bump’ along the way will be inevitable:  “I predicted that any growth would adopt a hockey-stick shaped curve towards the end of 2020 and into 2021 and in my opinion the curve has now simply shifted by a further 18 to 24 months, due primarily to COVID-19 but also to the US China Trade War delaying the inevitable 5G roll-out but also reflecting weakness in the automotive market – which was set to return to growth in 2020 but has now been delayed by 12 months, the impact on the commercial avionics sector is likely to continue well in to 2023, and slower than anticipated growth in IOT applications: In the cloud computing and military markets growth remains strong, while PC / laptops, medical and industrial markets are set to continue modest growth rates”.

Looking even further ahead, Fletcher is confident that UK electronic components markets will return to growth over the next few years but at a rate lower than the global average rather than at the top of the growth curve. He believes that stronger international economic growth, the impact of mega mergers and acquisitions and continued underinvestment in capacity for the manufacture complex electronic components will once again drive extended lead-times and shortages of some electronic components: “The pendulum of supply and demand continues to swing very erratically and will continue to cause a ‘stop-start’ effect on our industry”, Fletcher concluded.  “Until the entire electronics industry starts to really collaborate effectively and share its business intelligence throughout the supply network, we will all be at risk from these extreme market oscillations. I’m certain that stability will return, but I will need a crystal ball to predict just when…!” 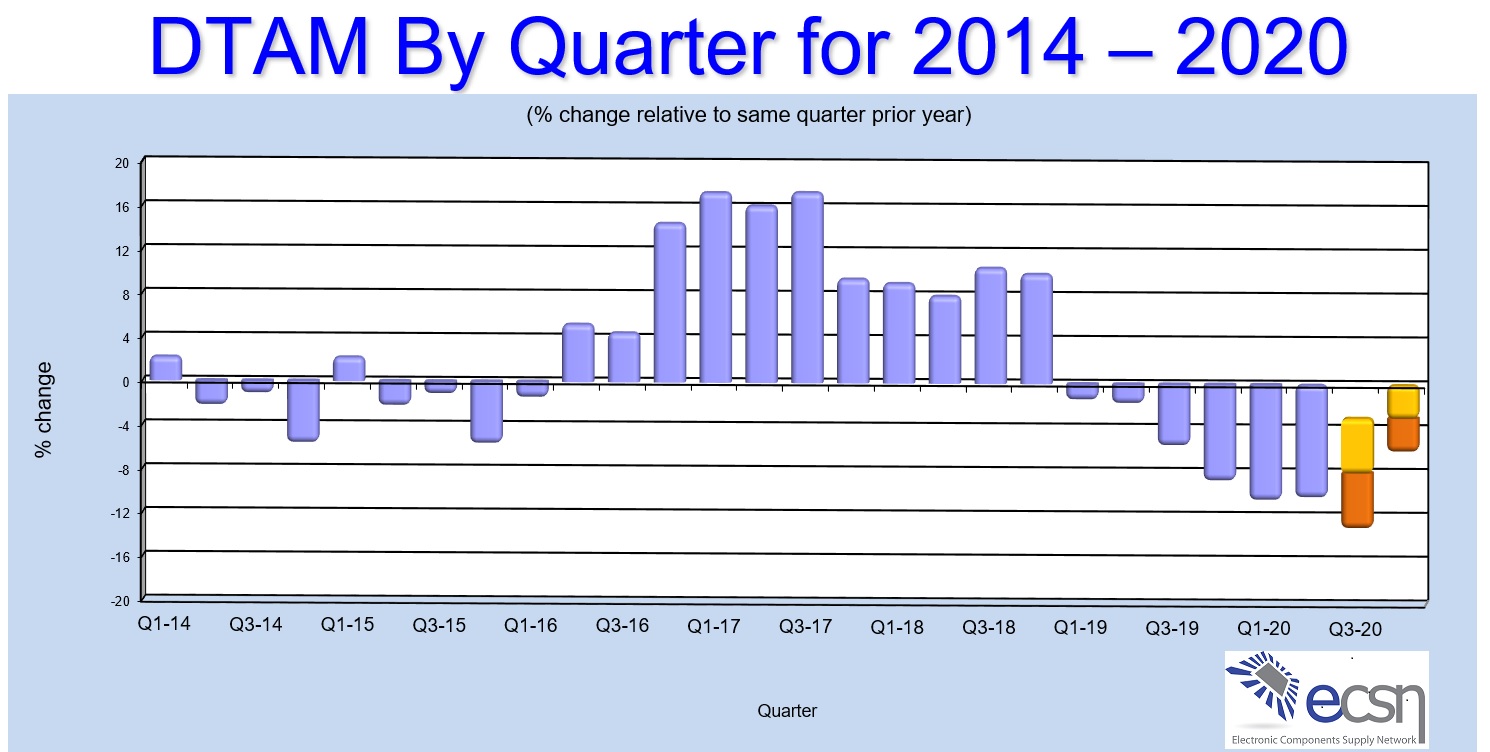