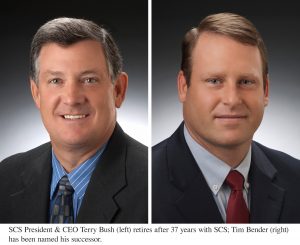 Specialty Coating Systems (SCS) has announced the retirement of President and CEO Terry Bush. Bush has been with SCS for 37 years, filling a number of roles in Operations before he took the helm as President and CEO in 2008. Known for his sharp business acumen and sound leadership, Bush has been a strong advocate for employees throughout his entire career at SCS.

Tim Bender, Executive Vice President, Sales & Marketing, has been named President and CEO, effective Friday, May 8, 2020. Bender began his career in human resources at an SCS-sister company in 1995 and transferred to SCS’ Indianapolis corporate headquarters in 2000. In 2003, he took over responsibilities for the company’s marketing department and joined the executive leadership team in 2006. Bush and Bender have worked closely together for 20 years, driving the vision and growth strategies of SCS along with other members of the leadership team.

Bender’s experience in both human resources and leading the global sales and marketing efforts for over 15 year have uniquely prepared him for his new role in which he will execute SCS’ core strategies related to sales and profit growth, regional expansion and operational excellence. Bender graduated from Missouri State University with a bachelor of science in business and minor in marketing. He received his MBA from William Woods University.

Reflecting on Bush’s tenure at SCS, Bender said, “Terry has played a major role in strategically shaping SCS into the company it is today. The company has grown greatly under his leadership – not only in the number of locations and overall revenue, but Terry’s compassion for employees and his desire to see employees at every level of the organization grow have been trademarks of his leadership. Terry compels those around him to give their absolute best each and every day. He embodies the values that we have set forth as a company – Respect, Integrity, Service and Excellence. While he will be missed, Terry has left a unique mark on the history of SCS that will long benefit the company and its employees.”

SCS is a leader in Parylene coating services and technologies with coating facilities throughout the Americas, Europe and Asia. To learn more about SCS, please call +1.317.244.1200 or visit www.scscoatings.com.